McCaul Catches Sounds of Silence in his Art 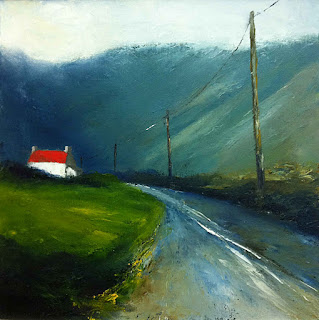 I was featured recently in an essay on art by Professor Jan Erik Rekdal of the University of Oslo.

Foreign art is especially important as it provides you with more windows to look into a place where you do not belong - in this case a place called Ireland and Éire.

There is one thing in Ireland there is more of than grass and that is light. As to light, Ireland is a land of plenty also in 2011! When I first visited Ireland (1969), I hitch-hiked to Achill. I was waiting once for a new lift on the roadside in Killibeg a little baile consisting of a post-office and a handful of houses. Two idle men sat on the wall an earshot away and when I praised the remarkably high sky and the lovely shades of green, grey and blue (for which the Irish language has the word glas covering them all), they sneered at me mumbling that you can’t live on light and sky!

Also many Irish painters struggle with the plentiness of light and sky. Since I started to give serious attention to Irish art, I have been trying to find out where in Ireland the artists come from, to see how this relates to her or his use of light. An artist from Fermanagh (Gerard McGourty f.ex.) has a different sky to one from Down. By sky I do not mean that you necessarily find sky in their pictures – but you do find light. You see the dimness of Fermanagh with its tinge of longing (for the sea) the way it is expressed in Gerard McGourty’ s art (not unrelated to that of Jack B. Yeats from a county close by) and the fertile almost gory green light of Down recalling the desolate atmosphere of ancient battlefields – a green you observe in Daniel O’Neill’s pictures. Dubliners tend to turn their light down considerably like Eithne Jordan who used the light of late afternoon has lately wandered into city-nights and their repressed obsession with light. It may rather be the longing for light lurking in cobble-stones and city-boys which underlies the paintings of another Dubliner, Gerard Byrne, making his colours so translucent that a light-muncher of a Norwegian like me, could want to eat his flowers . 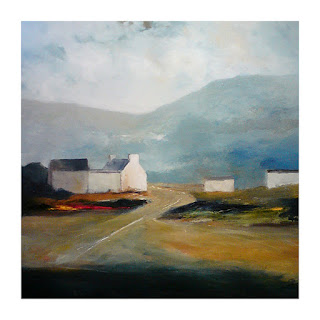 Belfast-artists used to leave their rusty town for the western sky and light, but very few has indulged so unbashfully in the western sky as Paul Henry once did (although I noticed recently paintings by a young Dubliner, David Coyne, giving in to sky on the railings of Marrion square with refreshing results). The one who actually dares to do so today is Padraig McCaul and even to walk if not in Henry’s footsteps, close by them – painting as he does predominately from Achill. But McCaul has a twist that is his own: the community he depicts seems abandoned. Achill was a predominantly Irish-speaking island now with hardly any Irish left. For me McCaul catches sounds of silence in his art. His Achill houses have no windows and hardly any doors. They turn their back on you in pictures that make you wonder, reflect and sense. 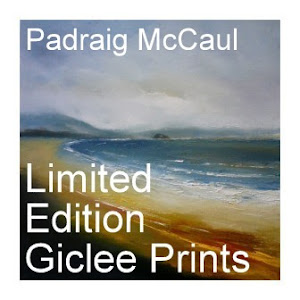 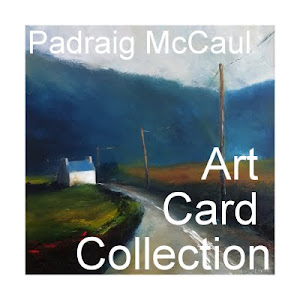